A Return to the Fields of Mars - After far too long lounging at the peace negotiations (a pathetic excuse for french-speaking nobility to partake of Germanic delicacies), war has broken out yet again between the peace-loving and civilized folk of St. Maurice and the heavy handed and nasty thugs that pass themselves off as the ruling class of Ardoberg-Holstein.  Below are pictures of a most recent engagement, the Battle of Hiltonia, 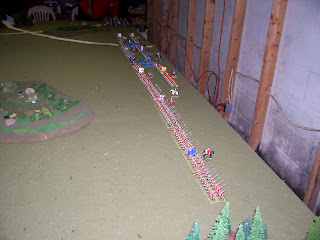 Here we see the forces of the Grand Duck (sic) arrayed, with the ubiquitous English and Hanoverian contingent marshaling to engage most of the center and all of the Duckal left flank. 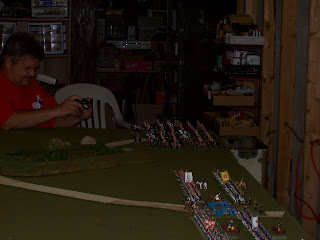 A close-up of the right flank, with all of the A-H cavalry massed to force the St. Maurician left.  We also observe the vainglorious Grand Duck (sic) confounded yet again by new fangled technology. 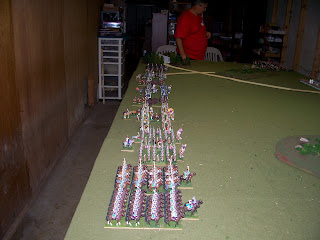 Finally, the good guys.  The flower of St. Maurice, with the heavy cavalry anchoring the right flank and a mixed cavalry brigade opposing on the left.  Venerable infantry names such as St. Germain and Clare massed on the center and right bear witness to the old St. Maurician adage "Use the foreigners first." 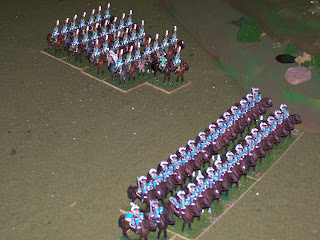 Here the Moliere Dragoons and Royal Musketeers advance to confront (and get mauled by) the English foot. 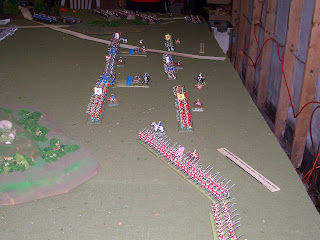 ...and the English prepare to meet them.  All of the Ardoberg-Holstein brigades are seen here, advancing in great style, with their guards battalions in the fore. 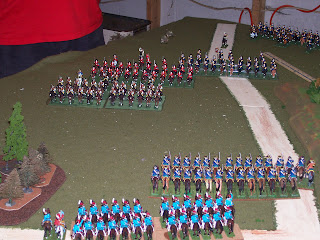 His Majesty's forces on the left were presented with a perilous situation.  One heavy cavalry regiment, the regiment Rohan-Soubisse, supported by the light cavalry Loncheney Hussars, to hold off two heavy brigades of the Grand Duck's (sic) horse. 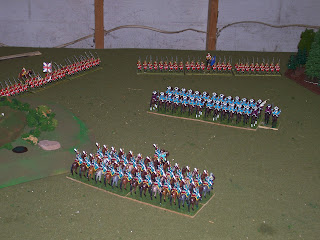 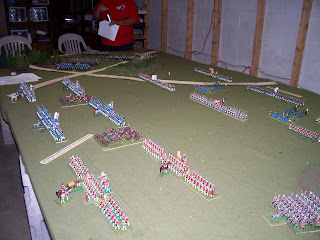 Here we see the Irish regiment Clare anchored on the battalion's guns, with the regiments La Marne and Dauphin arrayed to their left. 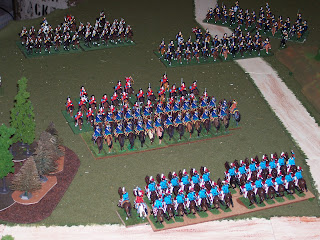 Last of the photos as Rohan-Soubissse confronts the first of no less than three A-H regiments, and would be victorious over each in turn.  How uncharacteristic of  St. Maurician horse!
When the smoke cleared, St. Maurice stood victorious on the field, but as they say in the old Charles Grant and Peter Young books, it was a close run thing.
﻿
at 9:39 AM

A very colorful battle, I must say, sir. Please do not wait so long before sharing another with us.

Alas, my feeble attempt at literacy collapses like a house of cards. It was a very good battle with hopes of doing more soon. Thanks Jeff.

The main things are looks like it was fun and St. Maurice was victorious.

Great to see the Might of St. Maurice in action (and victorious to boot) again: cheers!

Thanks gentlemen.
Fitz - You're right, it was fun and a testimony to some well considered house rules.
Jean-Louis - c'est magnifique mais c'est la guerre.

A Thug, am I, thou mangy cur. I would chastise you with....great chastisement if I wasn't so busy dispossessing widows and orphans.